Architecture of the City Palace

The City Palace is built on an elevated rocky outcrop on the east bank of the Chambal River and holds a commanding position over the river and the city which grew up around it. Today, one enters the City Palace from the Naya Darwaza on the Tipta Chauraha, the old city’s main square. This gateway, which is surmounted by the Hawa Mahal (Palace of the Winds) with its numerous screened windows that allowed the ladies of the Palace to look onto the outside world without themselves being viewed, was built at the turn of the 20th century by Maharao Umed Singh II.

Previously, however, the City Palace was entered through the Sailar Ghazi Darwaza near the Keshorpura Pol south of the Naya Darwaza. The Sailar Ghazi Darwaza is perhaps the oldest extant structure in the City Palace and is surely one of its greatest architectural gems. According to tradition, the foundations of this gateway were built over the mortal remains of Koteya Bhil who had been defeated by Prince Jait Singh of Bundi in 1264 C.E. and, fittingly, a shrine to Koteya Bhil, which still receives periodic worship by the royal family, exists just inside this gateway where it serves as a type of dvarapala (guardian of the gateway).

Whatever may have been the date of this gateway’s original construction, the Sailar Ghazi Darwaza’s current incarnation dates to the second half of the 16th century. It is built in a style that, interestingly, does not reflect Rajasthani origins but rather derives directly from the last years of the Delhi and Mandu Sultanates or the earliest years of the Mughal era. The chastely ornamented, but beautifully proportioned, gateway –– whose mortar-less masonry of alternating bands of wide and narrow courses of red sandstone is of absolutely of the highest craftsmanship –– is strongly reminiscent of several buildings in Sher Shah Suri’s fortress at Delhi as well as gateways and archways from the same period at Mandu. The Sailar Ghazi Darwaza is as a pure an example of Islamic architecture as one will find in a Rajput palace, and it is such an architectural anomaly that it is tempting to speculate that it was (re)built by the Pathan brothers Kesar Khan and Dokar Khan who came from Malwa and briefly ousted the Hadas from Kotah in 1545 C.E. and ruled there for 16 years until 1561 C.E. when the Hadas were able to wrest control of the city back from them.

Proceeding from the Sailar Ghazi Darwaza, one then climbs up a short distance to a second gateway known as the Naqqar Khana Darwaza. This tall and imposing gateway is surmounted by a pavilion where musicians played huge ceremonial drums, naqqar and naubat, that announced the arrival and departure of Kotah’s rulers. These kettle drums, several of which were bestowed by Mughal Emperors, are now on view in the Museum. An inscription on the outside of this gateway records the triumphal entrance of Rao Madho Singh into the Garh through this darwaza in 1635 C.E. Unreserved in its praise for the divine aura of the Palace, the inscription commends the Garh as ‘a second Mount Kailash, which removes the sins (pap) of whomsoever takes its darshan (sight)’. So be sure to look carefully during your visit to the City Palace; it will bring rich rewards!

On passing through the Naqqar Khana Darwaza, one enters into a large, earthen and gravel maidan known as the Jaleb Chowk. This maidan served as a military parade ground and venue for large entertainments such as elephant fights and religious celebrations, especially Diwali when the Palace and Chowk would by illuminated with thousands of oil lamps.

Overlooking the Jaleb Chowk immediately adjacent to the Naqqar Khana is a massive keep known as the Jantar Burj –– the tallest and stoutest battlement of the City Palace. Interestingly, this tower doubled both as a gun emplacement as well as an instrument for and locus of astrological calculations. The long, straight stairway to the top of the Burj served as a gnomon for making precise temporal measurements which are essential to astrological calculations. Similarly, on the first day of the Hindu New Year in the month of Chaitra, a group of jyotish priests climb this Burj in order to test the winds. Depending on their readings they make predictions for the coming year regarding the monsoon rains and abundance of the crops. The blending of military battlement and astral instrument in the Jantar Burj attests to the extent to which the Raos and Maharaos of Kotah saw the strength of their rule as depending, at least in part, on the quality of their astral knowledge.

On the far side of the Jaleb Chowk to the west lies the City Palace proper. The Palace consists of two main sections –– a mardana and a zenana (or respectively the men’s and women’s quarters) -–– each of which is served by a separate gateway. To the right (north side) is the mardana which includes several public audience halls as well as private residential apartments for the Raos and Maharaos of Kotah. The Rao Madho Singh Fort Museum occupies this portion of the Palace. To the south is the zenana. Linking these two residences is the Temple of Shri Brijnathji, the disarmingly diminutive golden tutelary God of the Kotah Maharaos, who was brought to Kotah from Mathura by Maharao Bhim Singh I in 1719 C.E. and who for some years accompanied Kotah’s rulers in battle mounted in the royal elephant howdah.

The mardana is approached through the Hathian Pol which was constructed by Rao Madho Singh and is flanked by two saluting elephants which Maharao Bhim Singh I brought back to Kota from Bundi as war booty by after his sack of that city in early 1720 C.E. Beyond the Hathian Pol, one encounters yet two more gates. The gate on the left hand side leads to the Temple of Shri Brijnathj. The other gate –– the remarkably small and un-presupposing Boreseli ki Deodhi –– belies the magnificent courtyard –– the Rajmahal ka Chowk –– which lies behind it. This chowk faces the main Durbar Hall, or Rajmahal. The Rajmahal and the armouries and apartments immediately adjacent to and above the Rajmahal (such as the Shila Khana, the Alsi Mahal, and the open multi-columned Barah Dari) were all constructed (or substantially remodeled) by Rao Madho Singh in the second quarter of the 17th century.

Almost every ruler after Madho Singh until the turn of the 20th century made additions and further alterations to the Palace. Subsequent rulers extended the mardana portion of the Palace by building both upwards and outwards along the east-west axis of the Rajmahal. For instance, Maharao Shastru Sal I constructed the Chhattra Mahal above Madho Singh’s Barah Dari. Similarly, the wing of the palace that extends eastwards from the Barah Dari and frames the north end of the Jaleb Chowk and contains the Bhim Mahal and Bada Mahal was added in the mid- to late-18th century by Maharaos Guman Singh and Umed Singh I. In the late 19th century, Maharao Umed Singh II added further apartments to the west of the Rajmahal.

Irrespective of these additions, the Rajmahal always remained the ceremonial focal point of the City Palace for it was here that the Raos and Maharaos had their Rajyagaddi (cushion-like throne) and gathered their court for darbars (royal assemblages) as well as entertainments. Despite the ostensive solemnity of these events, they often were conducted with mirthful ingenuity. For instance, miniature paintings in the Museum’s collection show that the Rajmahal ka Chowk could be flooded with water to create a lake for certain festivals, such as Janamashtmi, in order to bring cooling relief during the hot weather. And another miniature shows Maharao Ram Singh cavorting on his favourite steed with courtiers on the roof of the Chhattra Mahal, high atop the Rajmahal, in a feat that shares the same exuberant hi-jinx as a college undergraduate prank.

The architecture of Kotah’s City Palace draws on many stylistic features seen in other Rajasthani palaces. It follows Mughal protocols governing the use and layout of space –– witnessed for instance in the separation of men’s and women’s quarters and the centrality given to the Darbar Hall. But these feature are realized within a distinctly Rajasthani architectural idiom that favoured the extensive use of the chhattri –– or domed pavilion with deep, shade-casting, overhanging eves (chajjas) –– and representational ornamental motifs that derive from nature –– such as floral, vegetal, and avian designs used to decorate stonework columns.

However, unlike its Mughal precursors and Rajasthani cousins, one of the distinctive features of Kotah’s City Palace is that the architecture always maintained an intimate scale. This is surprising for a kingdom which was large and prosperous by Rajasthani standards. Even the Rajmahal, which although sumptuously decorated with beautiful wall paintings and elaborate mirror work, abides to a human dimension that sits in marked contrast with its equivalent, for example, in neighbouring Bundi. The architecture in Kotah was intended to impress, but not over-awe, the visitor. Instead, Kotah’s Garh retained a domestic feel that reinforced the familial bonds existing between Kotah’s rulers and their vassals (a very large percentage of whom were indeed relations). Significantly, this ethos was fully in keeping with the practices of the Vallabha Sampradaya to which the Kotah ruling family adhered insofar as this sect emphasized the importance of religious service (or seva) within a familial idiom as the best path for religious gnosis.

At the southern end of the Jaleb Chowk is the Palace’s zenana, which is entered through its own gate –– the Zenana ki Deodhi. The apartments of the royal wives and queen mothers as well as lodgings for young princes were located here. Within these precincts are also many temples that are closely connected to the ruling lineage, including a temple to the Goddess Ashapura Mataji, the tutelary Goddess of the Hada Rajputs. This temple remains to this day one of the principal focal points for Kotah’s annual Dasahra celebrations, which honours the Devi.

Like the mardana, the zenana grew organically over time with extensive additions and alterations. Nevertheless, some of these apartments appear to be very old and may well predate the constructions of Rao Madho Singh. For example, oral history suggests that a portion of the Kanwarpadi, or princes’ apartments, dates to the period of Hriday Narayan who held Kotah immediately before Rao Madho Singh. New apartments continued to be added right up until the end of the 19th century when Maharao Umed Singh II built a massive complex for his wives next to the pre-existing zenana. This complex now towers over the rest of the women’s quarters and can be seen for miles around.

Finally, behind both the mardana and zenana portions of the City Palace one can find courtyard gardens, the principal one of which is the Dil Khusha Bagh. This garden is laid out in a variant of the classic Mughal char bagh format with intersecting water courses that divide the garden into quarters. Today this garden has been developed as a wedding venue with attached accommodation that is available for hire. 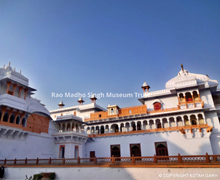 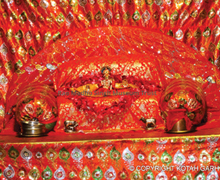 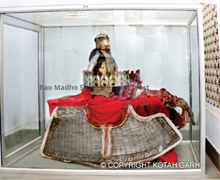 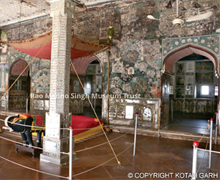 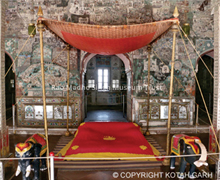 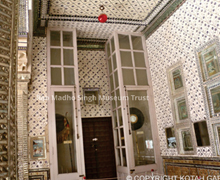 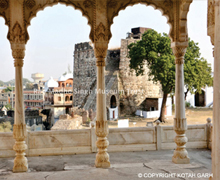 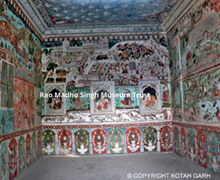 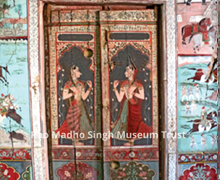 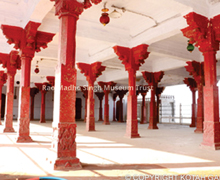 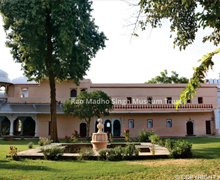 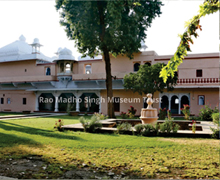 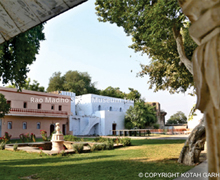 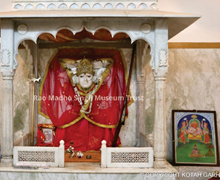 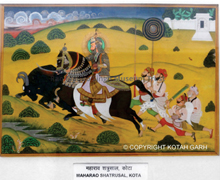